We had a great day with a lot of powder today. We hiked for about 2 hours to get a long run. The sun was shining and almost no wind, it was perfect hikingweather. Before we went back to Boardes Palace we also did a nice run close to the slopes, it was a good feeling to just cruise around in half meter of powder. 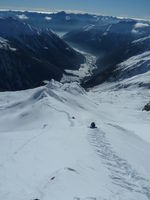 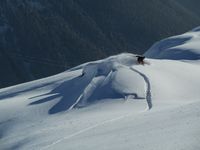 Nicke is cruising around in the powder

We went to St. Moritz on Wednesday morning for taking part in a 3 * freeride competition. We had the possibility to check out the face and choose our lines on Wednesday. It was ridersmeeting the same evening and on Thursday was the competition. I had startnumber 4 so I didn´t have be nervous for so long time. I made a bad run, had to stop and wait for the sluff and didn´t get a fluid run but anyway I ended up 3rd so I´m happy for that but I hope I will do a better run in Hochfugen next weekend.

We drove back to Austria after the prizegiving yesterday evening, extremly shit prizes, didn´t even get the entry fee paid with the prizemoney. But anyway, it is nice to be back in Mallnitz, today we had half meter of powder and sun:) can´t complain! 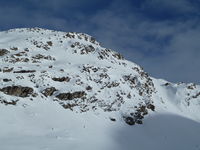 The competitionface in St. Moritz

On Saturday it was finally good weather and we could have the competition. All riders went up by the lift 7.30 in the morning to check out the face and choose our lines. The girls were riding first, I was the second snowboarder girl to start, happy for that! It´s always fun to have the possibility to watch other girls. I´m happy with my run, no crashes this time! My brother made also a good run and ended up second in men snowboard. I won the category women snowboard, it was a great weekend for team Hollsten:D

We drove over the night back from Slovakia to Austria, went for snowboarding at Kitzbuheler Horn. Went there just to check out the place and our Salzburger Super Ski cards are valid there. Nice skiresort when the sun is shining! but it would not be too nice to sit in this slow 2 chairs lifts when it is windy. There was about 20 cm of powder but a lot of sharks, almost no people so we got some nice offpistruns. We are at the moment in Munich, will drive to St. Moritz on Wednesday morning. 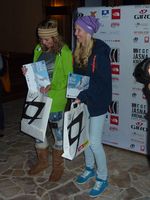 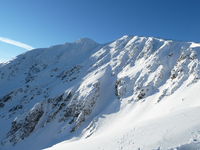 The competition face in Jasna

The quali.competition is postponed until tomorrow, it was bad weather today:( It has been snowing the whole day so I hope there is some powder in the face tomorrow even if it will be hard snow/ice under. Came just back from riders meeting, got information about the startorder and that kind of things, there will not be too much time to check out the face tomorrow, we girls will ride first. But I was riding the same face last year so I hope I remember it, it just looks so different on the pictures this winter, here is almost no snow! But let´s see what will happen tomorrow...!!!:)

Made one of my worst competitionruns ever in this competition in La Clusaz, lost my line in a field of stones, slided over a lot of stones! But it was really nice to meet all freeriders again! Watched the finals in perfect sunshine and had a good weekend! We are at the moment in Munich, actually in Burger King right now. We will drive to Slovakia, Jasna tonight for a 3 * FWQ event, hope for better luck there!

Had a good day here at Ankogel today,10 cm of new snow and sun! We will drive to France, La Clusaz tomorrow to take part in the first womens freeride world tour competition this season(4* FWQ for men). Hope for good weather! Have to pack my staff now!

We had better luck with the weather today so we could have the freeride competition:) Everybody had about 1 hour in the morning to check out the face and then we went up to the start together. First we had to traverse and then we hiked up for about 30 minutes. Some people made some small crashes but nobody got hurt, so it was a good day and people enjoyed it. It has been a busy but a fun weekend. 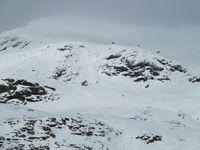 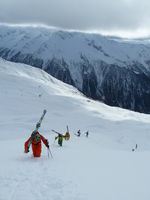 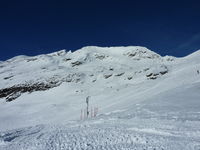 It has been a busy weekend, a lot of people here in Boarders Palace and then has my brother arrange a freeride competition here in Mallnitz, Ankogel X-treme invitational. The plan was to have the competiton today buy unfortunately it was too bad weather so it is now postponed until tomorrow. But we had Chinese downhill instead today:) fun competition, the start was at the T-bar and then we went all the way to the bottom. The skiers went first and after that all the snowboarders, girls and boys. All the riders had to stop at the middle station for a beer, not so easy to drink fast! But let´s party now!... 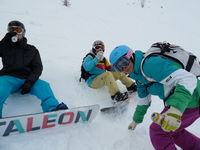 We went by bus from Mallnitz to Mölltaler in the morning, there was a lot of people on the glacier, had to wait some minutes for the train to get up to the slopes. Hiked for a short off pist run on Mölltaler, good snow and first tracks! After eating some lunch we went for the Schareck run, we got first tracks in the beginning and in the end but in the middle part there were a few tracks. We had about 20 cm of powder the whole run, so pretty good! We took one run at Sportgastein also before we went to Häggbloms bar for afterski. Sportgastein North is pretty tracked but we found some good snow after some traversing. 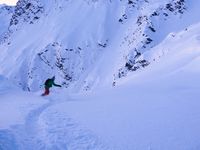 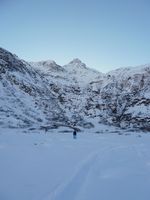 We found some nice lines in Sportgastein, hiked some minutes to get to some untouched snow, the hike was worth every minute! There was about 30 cm of powder, so not too bad. Tomorrow hopefully first Mölltaler and then Scharek. A 45 minutes long offpist run is waiting for us:) 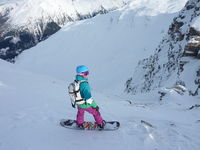 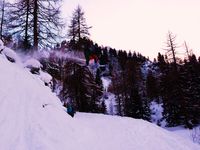 Nicke is jumping over the transportroad

It was hard wind tonight and cloudy in the morning, so we decided not to ride Shareck today. We went instead to Sportgastein and that was a good choice, a lot of fresh powder on the North side and not crowded at all. Tomorrow we probably ride here at Ankogel. Many friends are here in Mallnitz now so I think it gonna be a good day tomorrow also!:)

Not everything goes as planned but at least something

We went from Mallnitz by skibus to Mölltaler Gletscher today. The plan was to ride Scharek but it was cloudy in the Gastein Valley so we decided to stay at Mölltaler. We didn´t ride almost any offpist, the snow was really windpacked but slopes were in almost perfect condition and the boardercross course is great. There is also now some kickers on Mölltaler! The trip back to Mallnitz took almost 2 hours! We had to change buss in Obervellach and we had to wait there for one hour, we got wrong information about the timeschedule. But finally we arrived to Mallnitz, we just changed clothes and went then to play pool. I went to the "billiard-place" by longboard, bought new wheels for the board today, it was like to have a new longboard when I have new wheels under, so nice! Tomorrow we gonna try to ride Shareck again...