It was bad conditions for freeriding in the beginning of the week so me and a friend went to Bad Gastein for riding park. We had so much fun, there was soft landings and not that much people. We learned some new tricks also, not that difficult ones but anyway:) I´m not a parkrider but it is really fun sometimes. We went to Zauchensee on Friday and Saturday for taking some photos. Really nice forestriding. It was snowing both days but we got some great runs. Today was just a perfect day for freeriding! It has been snowing for 3 days so we have a lot of powder here in Mallnitz, about half meter! It was just so nice, so fun, I´m just waiting for tomorrow! 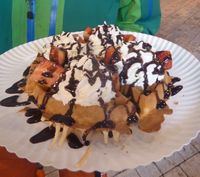 It has been a busy week, a lot of hiking and then Nendaz Freeride in Switzerland. I and a local experienced skier went hiking on Tuesday, 9.3. We went up to the top of Ankogel with help of crampons/skins, sticks and ice ax. It was an interesting experience for me who is not used to this kind of hiking. We used rope the last part of the hike, there was actually pretty good tracks from before but I wanted to feel safe when I was hiking. We were a little bit unlucky with the weather, had to wait on the top for about 1 hour for better visibility, after that we walked/skied over the glacier. To avoid falling down in some glaciercracks/crevasses we had rope connected to each other, everything went fine and we got to the beginning of the couloir. It was one of the best couloirs I have been riding so far and I have never heard anyone riding it before! 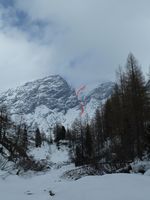 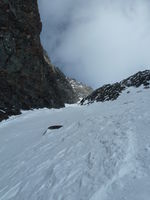 We went to Switzerland on Thursday morning for taking part in Nendaz Freeride, womens FWT, mens 4* FWQ. In last second they changed the quali. day from Saturday to Friday! Luckily we got there in time! We had two runs in the quali. and then they put the points together. The first quali. face was a catastrophe, extremly bumpy, totally tracked, icy and short. The second face was better, sugar snow and longer run. I had two stable runs and made it to the final! The final was on Saturday morning, I got startnumber 1! It was a nice face with a lot of possibilities. I had no problems to find my line and got a good start with two small drops, I had good fluidity when I entered the couloir in the end of the run but I lost the control half way down, the sluff catched me and took me down. I have never been in so much sluff and the sluff came with so hard speed, I should have stopped and waited for the sluff but it is easy to say afterwards. Finnish TV were there for filming so at least they got an interesting filmpart:) 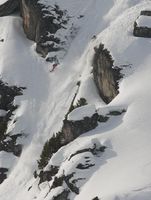 The sluff took me down with speed

Next year again! worth another try!

It was an interesting day yesterday, the plan was to just stay at Ankogel and ride there but the snow was shit so we decided to try out the run from Ebeneck to Böckstein Anlauftal and it showed out to be a good decision! We got some nice powderturns after a short hike. It was windpacked snow in the beginning of the run but it was good after that. We ended up on the wrong side of the river but luckily there was not so much water. We had actually lunchbreak in the middle of the river, we found some stones to sit on, perfect place to eat some Billa sandwiches. We went back to the trainstation after finishing the lunch, the first part of the road back is so fun, it is like a boardercross course. 4 happy people ended up at the trainstation about one o´clock in the afternoon. Two of us went by train back to Mallnitz.

I already went to the hotel and had planned to start to work when my brother said that they have plans to hike up to Ankogel still in the afternoon. I decided to join after some minutes of thinking. I borrowed crampons and an ice ax from a really nice and helpful man who often hike and ride here in Mallnitz. He carried my board up, best service ever!!! It was so much easier to walk with crampons, I need to buy some for next season! It took just one and a half hour to hike up to Kl. Ankogel, we were there when the sun went down, so beautiful! But it had been good to have a headlight for the last part of the run. I didn´t think about to take a flashlight with me but there were some experienced riders in the group and they had some lights. We ended up at the trainstation 7 in the evening!:) It was a great experience for me!

On the way through the forest:)

It has been a busy week, a lot of travelling and hiking! We went for some sightseeing in Andorra la Vella and in Barcelona on Monday. The boys didn´t feel that they were in shape for riding and I didn´t want to go alone so we made some sightseeing insted. We spent the morning in Andorra la Vella and then we drove to Barcelona. We were eating some paella and just chilling. On Thuesday was it time to go back to Austria, first by plane to Munich and then back to Mallnitz by car. Our parents were waiting for us in Mallnitz, they came to visit us for a couple of days. 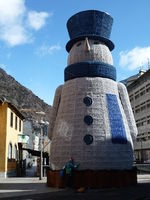 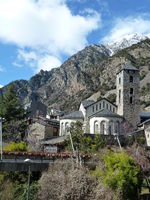 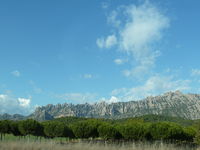 On the way back to Barcelona from Andorra

Me and my brother and 2 friends went on Wednesday for a hike up to Kleine Ankogel. It was snowing and foggy in Mallnitz when we started to hike up. I was a little bit sceptic about the weather in the next valley(Böckstein anlauftal) but we were lucky, we could see the sun after about 1 h of hiking. It´s not every day you get a 1900 vertical meter run, it was absolutely worth 2,5 h of hiking! 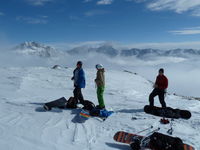 Time for a short brake in the sunshine!

Today it was time for Schareck again. We were first riding on Mölltaler before we went down to Sportgastein. The snow was great! and it was pretty good in Sportgastein too, we took just one run on the North side before we went to Häggbloms for a cider/beer. 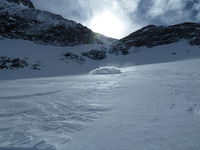