The weather has been changing pretty much the last two weeks but we made some nice runs in the area of Mallnitz and Sportgastein. We went one day up to Dösnertal valley, I had never been there before so it was interesting to go and take a look. We didn´t manage to hike up to the top in the couloir we had been planning to, it took too long time, we had to go to Billa(foodmarket) before they closed it:) But it was an interesting hike, it took us 45 minutes already to reach the snowlevel! The couloir was so icy so we had to ride down with ice axes in our hands to be able to stop if something had gone wrong. 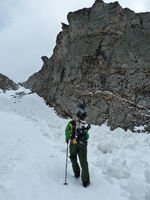 Juuso hiking up in a couloir in Dösnertal

We made one morning also a tour up in Jamnigalm, we started half past six when the snow still was frozen and it was good to walk also with snowshoes. We rode down in perfect springsnow, really nice! 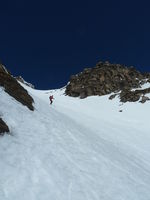 One of the best runs this season was a run down from Mölltaler, across the glacier and up to Sparangerkopf. The hike or actually climbing up took one and a half hour; the run was worth every minute of hard work! We had powder snow in the beginning of the run and after that nice springsnow. The couloir was about 45 degrees, perfect steepness for me, not too steep, just fun to ride! 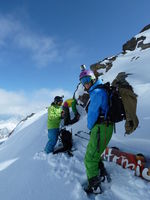 Time to put on crampons 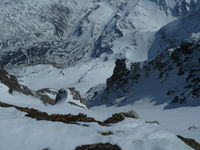 One of the best runs this season! Here is the start! 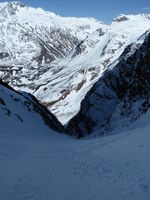 In the end of the run 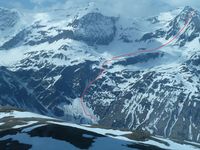 I went last week to Croatia to visit some friends there. In three days I managed to see Zagreb, Rijeka and Ogulin. I went from Mallnitz by train to Zagreb and from Zagreb by bus to Rijeka and then again by train. Rijeka is a nice city close to Adreatic Sea and Ogulin is a small city one and a half hour by train from Zagreb. In Rijeka I tried honey Rakija for the first time in my life, really good taste especially compared to normal Rakija! When we came to Ogulin we went for a short bikingtour for taking a look in the city and the nearest area around. I went back to Mallnitz on Thursday evening so I could get two more days on snow before we left from Austria. 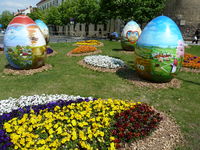 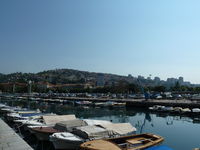 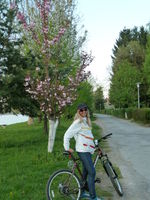 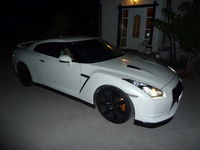 This car went fast, I´m not used to sit in this kind of cars, top speed 330km/h!

We are at the moment in Norway; we drove up here via Germany and Denmark. We will take part in Röldal Freeride Challenge in the end of this week. Hope for good luck with the weather this year, hopfully no volcanic eruptions on Island this year!

It is snowstorm in Mallnitz today; it has been windy for almost a week! Ankogel is closed now so we went for a tour in Jamnigalm yesterday. It had been plus degrees over the night so it was not that good, the hike was nice but the run down was not that fun, we had to straightline almost the whole way to not get stucked in the snow, it was even possible to straightline the 45 degrees steep faces! I hiked up with snowshoes and my brother tried his new splitboard for the first time.

The last weekend was great, Ankogel was open and we got some nice runs in springsnow and we had also time for some longboarding in the afternoon… 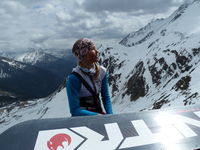 Jamnigalm,I took a longer lunch brake meanwhile Nicke hiked all the way up to the top 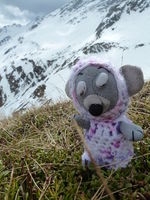 My friend! Jenni made new clothes for him, thanks Jenni!

Me and Jenni longboarding, pohotographer Bernt took the picture from the terrasse of Sportcafe

We did Scharek a few days ago, the weather was perfect, maybe not for snowboarding but for taking it easy. Take a look! Scharek in the background! 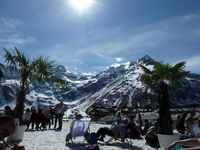 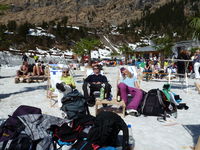 Hello! It is a while ago since I had time or possibility to write blog. We have moved to a new appartement and everything is getting better and better:)

I have had so many good days on snow during the last week! A lot of hiking and freeriding! One day we hiked up to the top of Ankogel.I don´t know why but I was so tired when we hiked up. The weather was perfect, the sun was shining, no wind but my body was out of power. The beginning of the run was nice, but then we had to traverse back for forever! Oh I was so unmotivated when I finally reached the skislope. But the motivation was on top the next day again:) 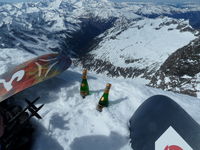 At the top of Ankogel

Three days ago we made a hike up to Schönbretterspitze, none of us had ever been up to that peak. It was an interesting hike, not too hard, just perfect for me. But the last part of the hike was pretty steep, about 45 degrees. We used crampons and ice ax so it was actually no problem to reach the top. We got a lovely long run down from that peak, springsnow the whole way! I want to do this hike again some day. 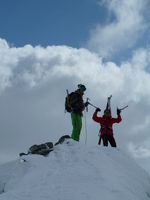 The day after we went down from Ebeneck to Böckstein. My brother and a skier took a different route but we met half way down. I and four boys went one by one down from Ebeneck, it is North side so there was still some powder. The only bad thing was that we had to walk for about three kilometers to get to Böckstein anlauftal, but the walk was actually nice, the time goes fast when you have nice people around you. 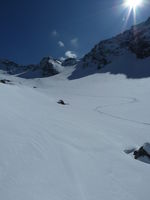 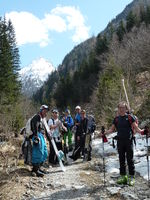 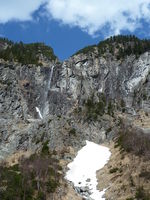 We went yesterday to Mölltaler and from Möllteler to Sportgastein in the afternoon. Mölltaler was nothing special but the run down to Sportgastein was interesting. We took a couloir down that was new for all of us. Suprisingly good snow almost the whole run, havn´t been riding so good snow in a long time. In the end of the run my brother wanted to take a couloir that he had never been riding before. He went down a little bit to check the outrun and at the same time he started an avalance, I was so scared when I saw what was going on, nobody said anything, it was a totally quiet moment, the only thing we heard was the avalance. It was a stupid decision to try this couloir in the afternoon, it had been in the sun half of the day and the snow had melted and there was a lot of water under the snow and there was almost just grass under the snow so it started to slide easily. When we had checked that he was safe down went I and the rest of the group for a more safe route. We took the "Swedish" route down, pretty trucked but stable snow, no more adventures for this day! They didn´t have any cider at Häggbloms bar so that was pretty bad but I survived:) 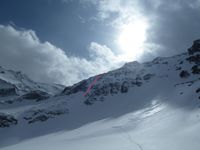 The couloir we took on the way down from Mölltaler to Sportgastein, really good snow 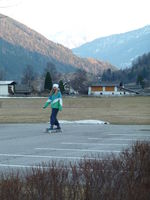