X Over Ride in Kaprun and filming in Kärnten and Salzburgerland

It was time for one more competition last Saturday. It was face check on Friday so I went there to take a look, I found a line that felt good. I had actually good feeling before the comp., usually I feel a little bit scared or nervous before the run but I felt so relaxed this time. The run went good, one but check after the last drop in the end of my run but otherwise I think it was one of my best runs this season. 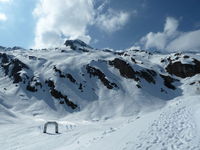 The copmetition face at Kitzsteinhorn

I got 2nd place in this competition, Amber took first place

I went to Mallnitz after the competition, I hadn´t been in Mallnitz in a long time. We celebrated the day with some prosecco in the evening. Me, Lotten and my brother were all on the podium! So it was a great day!

It has been pretty much filming now after Kitzsteinhorn. We had plans to hike and ride a short narrow couloir today with Bernd but when we got there we realized that it was too risky, it was a big crack in the snow in the outrun, so we skipped that idea and rode a big nice field instead. It is springconditions here, soft snow and sun. Tomorrow filming again, probably in Sportgastein but it depends on the weather. 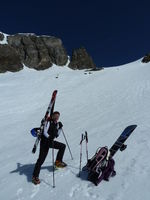 This morning, on the way up to the couloir 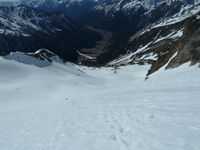 The run of today!

Two competitions in two weekends and some nice hiking there between.  I took the car-train from Mallnitz to Böckstein last Friday, drove to Innsbruck to pick up a friend and then we drove to Arlberg. We went with my friend´s car from Arlberg to Chandolin in Switzerland. We did the face inspection in the morning and went up to the face. I took a pretty safe line, because they counted two runs together, one run on Saturday and one on Sunday. I had a good run with some few drops on Sunday but I lost the first place with 0,01 point! It could not be closer but I haven’t had good luck this season. 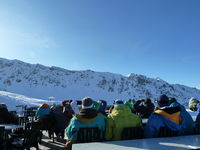 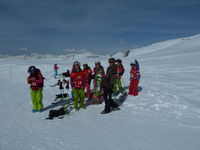 In Chandolin, before and after the competition

I got the opportunity to join some guys for an interesting hike in the middle of the week. We started on Tuesday at noon and we stayed in a hut over the night and woke up at 5 in the morning to start hiking to Patteriol. The hike up to the top from the hut took us 5 and a half hour, nice hike with slow nice tempo. It was one of the longest couloirs that I have been riding, the snow was not perfect for snowboarding but it was a fun run, specially the last part where there was good snow. We took a short rest in the hut on the way back before we started to walk and ride back in direction Arlberg. I can tell you that I slept good that night! 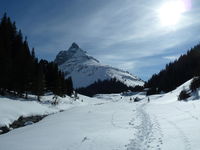 On the way to Patteriol 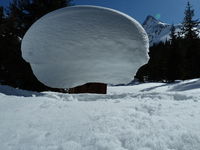 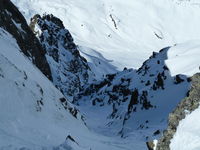 From the top of the couloir from Patteriol

It was time to drive back to Switzerland on Thursday, this time to Nendaz. We couldn’t find any accommodation in Sion the first night so we drove to Martigny and stayed in a hotel there. It´s not often that I stay in a hotel so I looked forward to the hotel breakfast. We drove up to Siviez after a nice breakfast, took the lifts up to be able to check the faces. We didn’t exactly know which faces they were planning to have so we checked some few. In the evening we had to go to ridersmeeting to get some info about the comp. The meeting was late as usual! And we had to be up in Sivez next morning at 7. The organization could easily be so much better in Nendaz. A short meeting in the morning and then up to the competition faces. The riders could ride down when they wanted, there was no starting order, we just had to tell the starter when we wanted to go. I was one of the first riders to ride down, I wanted to go up early to not be in a hurry later on. My first run went as planned but the second run could have been much better. I didn´t make it to the finals but I stayed there one more day to watch the competition. The judging was a little bit strange in the women snowboard category, the judges made a mistake in my opinion, hopefully they manage to do a better competition next year. 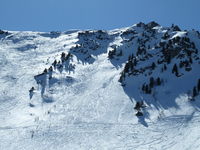 One of the quali. faces in Nendaz 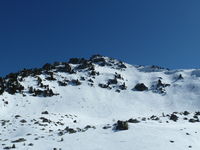 Some Finnish friends came here to visit us in Mallnitz, I didn´t know all of them from before but it was a bunch of nice and friendly people! The stayed here for three days and we got 3 days of good riding! It came about 20 cm new snow in Monday, so we went for some forest riding, I think we were the only ones riding offpist there that day! 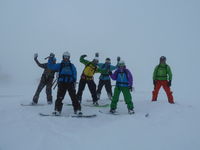 The crew of today 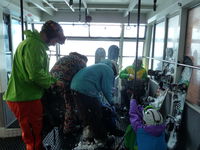 Lunchbreak in the lift, time saving:) 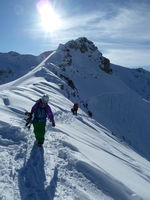 Yesterday we went to Mölltaler in the morning and took some runs there. Then later down to Sportgastein and up in Sportgastein for one more run. Powdersnow and great company!