It has been some days of travelling in the last 2 weeks, it started with the comp. in St. Moritz in Switzerland where we had to ride in pretty bad snow conditions, it was a mix of powder,hard snow and ice. I chose a line on the wrong side of the face. The run went okay but I know that I could have done it better. I had no problem to find my line but, yea, im not happy with the result. Many competitors got lost in that face, so lost that they had to take of the board and hike up. For me is the orienteering not usually the biggest problem, I think my biggest problem is that I dont trust myself and my riding enough. I need to change that in my head.

For the rest was not the competition in St. Moritz so good organized, people had to stay one more day there just to get the results and in the end they had really bad prizes and the prizegiving was in a room made for maybe 15 persons, it was not a success!

It was time for some powderdays in Arlberg after driving back from St. Moritz with my small Tigra. 3 persons with snowboards are almost too much in my car, but it works!

We were last weekend in Hochfugen for a qualifier competition. Nice snow, sun and a well organized competition just the judging was strange this year again! specially in men snowboard, cant still belive it! And the same morning as the competition started they told us that we are also allowed to ride on the riders left side of the face, some riders knew about it from before, others didnt.

I made a run without any crashes but I was the 3 rd last starter of all and chose a line where many skiiers went down before, it was a bumpy field to ride in and I could not get the fluidity in my run, it felt good otherwise, so I feel a little bit sad that I took that line, I didnt think that so many riders would choose a line in the same couloir, but hopefully I learned something again!

I will now enjoy some days in Arlberg and also do some schoolwork and then go to Andorra in the middle of next week. 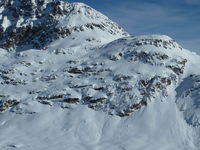 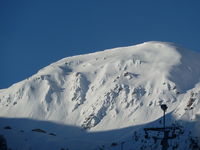 The comp. face in Hochfugen, Austria