At the moment I feel so disappointed on myself. If I had made one turn in different direction today I would have had a good run but I did a mistake and the sluff was strong enough to get me out of balance for a second. Anyway I had a good line and perfect snow in my run in Obergurgl today. I have to say thanks to the organizers of the competition, it was the best organized competition this season.

By some reason I have been riding better in the less important competitions, I hope to change that for next season. I know that I can ride but I need to get stronger and more fluid and stable.

The last weeks I have been riding competition in Nendaz and Kaprun and also done pretty much hiking and splitboarding. We have been taking photos almost every day and I hope we will get some good articles written down. 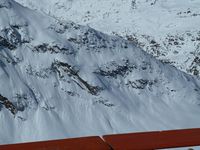 The nice competition face in Obergurgl

From West to East in two days

From West to East in two days

At the moment it feels like a bit too much travelling. It would sometimes be so easy and relaxed to only stay at home but in other hand I really like the way I´m living. It´s sometimes stressful but at least it is not boring. If it was not for sport and especially snowboarding I think my life would look really different. For the last years my goal with working a lot in summertime, is to earn money for the wintertime. In summertime I can work with my second passion; flowers. It feels usually so easy to be at home in Finland in summertime, I know many of the people on the island and almost nothing is changing there, it is the opposite of my life in wintertime.

After being in Andorra for one and a half week and one day in Barcelona it was time to go back to Austria for a day. It was a really nice time in Andorra, I had a good run also in the second contest and ended 4th in the 4 star FWQ competition in Andorra. I really appreciate that the judges took time for telling the riders what they could improve and do better for the next competition. 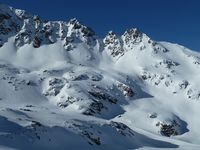 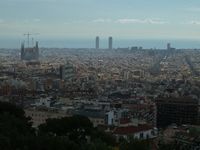 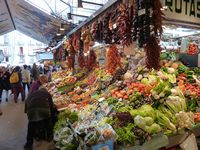 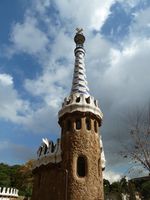 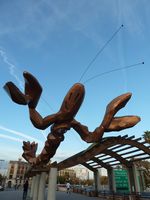 Park Guell and some art next to the harbour

After one day in Arlberg I left again for the next competition, this time to Jasna. I have not many times went by train to a comp. but this time I found it the easiest and most clever way to travel. One friend got on the train in Innsbruck and in Vienna we met up with another friend and from there we went together by train to Bratislava. From Bratislava we continued by rental car to Jasna in Slovakia.

The riding conditions in Jasna were so bad that it was almost fun. You couldn´t see anything the two first days, low clouds, some snowfall, stones in the slopes and ice. After a day of waiting we could start the competition. The snowboard girls were dropping in last so we had plenty of time for face check. It took me a long time to decide my line, when I went up to the start I had still not made my decision. After I had been watching some runs of the snowboard men I decided to go for the less technical run. I saw so many people falling and to ride on ice and hard packed snow is not easy with snowboard. I can now see that I made the right decision, I got so happy at the price giving ceremony when I got to hear that I ended up first. I shared the podium with Maria Kuzma, that I travelled with and Manuela Mandl got third. 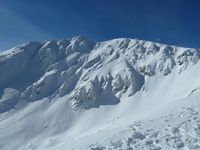 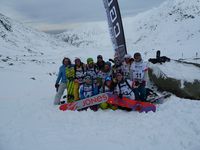 Competition face in the morning when it still was sun. Second photo after our run at the finnish line.

Again a nice trip behind, now I´m really looking forward to some rest and then splitboarding.