It was time to leave Austria after many days of splitboarding and some days in the park. Me and a friend from Finland packed our stuff in my old and rusty Opel Tigra, called Loppan. It took us some time to fit in our things but we managed to do that and got on the road direction Norway and Röldal. We took good time on us and had time for sightseeing on the way up. We slept in tent the first night in Denmark, we didnt have the best luck, it started to rain during the night and we had to pack in a wet tent in the car the next morning. On the way up we stopped in Aarhus for a tea and internet break and then we decided to go for some random sightseeing. It sounds maybe strange but we walked around on a churchyard for almost one hour. It ws the most peaceful and beatiful churchyard I have seen, nice plants and flowers. We continued our trip up to North Demnmark and took the ferry from Hirtshals to Larvik in Norway. We got some sleep on the ferry and could slowly drive up to Röldal. 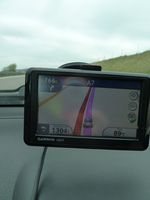 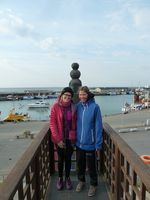 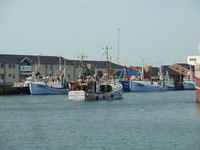 The plan was to go riding in Röldal skicenter in the morning but when we arrived there we got to know that the lifts were closed for two days. There were no information about this at the skicenter but we found a man who could give us that information. I had all my things in my car and could go for a splitboardtour instead. I went for an easy but long tour. I dont want to take risks when I go alone so I used the slopes of the skicenter to get up to the more flat parts. It was a beatiful and relaxed day, I really enjoyed it. The next evening we had riders meeting for the FWQ 4 star comp. that was planned to start on Thursday. Due to bad weather forecast for Thursday the organizers postponed the event until Friday- Saturday. The weather was not as bad as they said for Thursday so we could use the whole day for checking out the face. I choosed a line but the next day I changed it. When it was time for start on Friday we had totally flatlight and it was not easy to ride, luckily the snow got soft. I did a run without bigger misstakes and was in the lead for day two. I was not easy to know how to ride on day two. I knew that the other girls were in for trying to go for a win as well. I choosed to start from lookers right, the other girls choosed the left start. When I hiked up I tought the starting gate will be lower down in the face but lyckily I had time enough to check out the first part of the face as well. It was the steepest start I have ever been riding down from, but I feel usually good when I have my snowboard under my feet and it also went good. I had a stable run and in the evening I got the information that I won the competition. On second place was Anna Orlova from Russia and third Anouck Mouthon from France. For me this feels like the most important win ever and it gives so much motivation to continue. 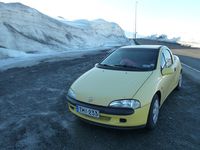 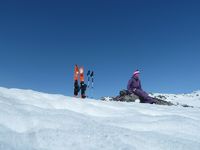 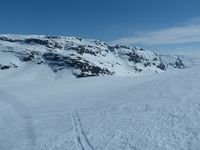 Im now sitting on the ferry on the way home, 2800 km of driving is enough for a while. Will enjoy the work in the garden shop at home on Kimito Island.

A night in the tent high up in the mountains

A night in the tent high up in the mountains

I have for the first time in my life been sleeping in a tent high up in the mountains. We wanted to do something different and to get new experience so we decided to go for a splitboard tour and stay for the night. We got to see an amazing sunset and woke up to a clear sky. It was not the most warm night in my life but I had luckily a sleeping bag that can handle minus degrees. One of us didn’t remember to bring dry socks so I can tell you that he didn´t enjoy putting on sweaty- frozen ones in the morning. But yea, we all survived the night without bigger problems and the hot porridge for breakfast tasted better than usually. 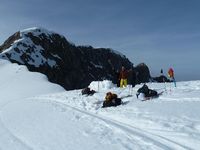 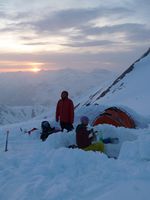 In the morning we had to decide where to ride down. On the way up we had been looking at a nice couloir and we decided to try to get to that one. For me it turned out to be a too hard hike for my head, to walk on a 1 meter wide ridge for some few hundred meters with high cliff drops on both sides was for me too hard. I took the decision to turn around, only one of us three would have liked to continue so we went all down the same way we had hiked up. This was also a new experience for me; I have not been at a place as that before and I know that I did the right decision when turning around. When I`m really afraid for something I get too stiff in my body and then it happens easier that I make mistakes. I have not many times in my life had this feeling but I need this to learn to know my limits and to challenge them next time I will be in a similar situation. I have to admit that I was also afraid turning around, I thought it will be harder than it was to hike down and in my head came up thoughts about somebody I knew who died last week when he was turning around during a skitour. He was one of the most careful and passionated freeriders I knew. He will often be in my thoughts and he was one of them who took me with him on my first freeride adventures, its hard to understand that he is not on this planet anymore. But there is always a risk in everything we do, sometimes the risk is big, sometimes small but I will always try to continue doing what I love. 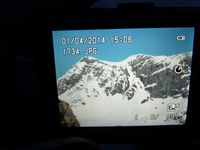 Photo of the couloir we planned to ride, it had been easier to hike up in the couloir than to walk on the ridge, at least for me.