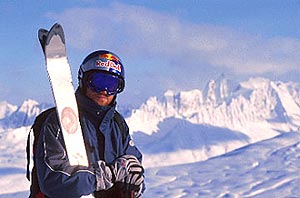 Shane, tell us a little about your skiing background?
I skied out of Tahoe when I was young, then I went to the Burke Ski Academy until I was 21 years old. After that I skied moguls for a few years. In 94 I did my first freeskiing event, WSEC in Alaska and I finished second.

Which dicipline has influenced your skiing the most?
Everything, I know all the years of competing has given me competition experience and that has helped me a lot.

You have had many good segments in several skiflics, which of all the one do you like the most?
There´s something about McConkey – The movie about myself of course, haha. Besides that, back in -96 I think it was, I don’t remeber which movie it was, but it was the one where I first skied on fatties. And I also think that some of the billy-goating lines I´ve done in the past has been fun. 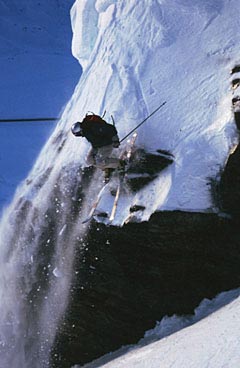 How would you like to be seen as a skier?
I like people to say, – what a jackass, I can’t believe that retarded dork is still sponsored. Besides that, creative and a guy who skis everything.

Why do you think skiing has gotten cool again?
I hasn’t really. People just say that. Kids are still snowboarding. There are cool things happening in skiing, but it’s not cool.

What is the biggest threat to the continuous developpment/evolvement of skiing?
Lack of interest

Strange, I though you were going to say FIS. For long time you’ve been one of the preachers about how bad FIS is, why is FIS so bad for us?
Just compare the finals in moguls and halfpipe during the olympics, it’s a world of difference.

During the mogulfinal there where some100 twisters done, and in the top three, that was almost all they did. By looking at that you can see that FIS doesn’t endorse creativity. And for the record, twisters are gay.

What are you going to do when you quit skiing professionally?
I would like to be a landlord, and go back to delivering pizza, just like I did before

So, your not going to kick back and live of the money you’re making today?
I wish I could, but I don’t make that kind of money 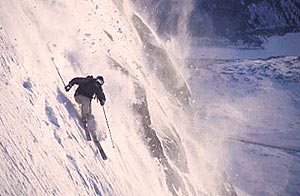 Which is the coolest, mutegrab or nutgrab?
Both in the same air would be cool

What about cliffjumping or basejumping?
Basejumping

What are your favorite places to ski?
With a heli in the coastal mountains

Have you gotten spoiled, what about parks?
Parks are fun, but they’re for bad weather

A lot of people out there look up to you and the readers of Powder Magazine recently voted you best skier, but what skiers do you look up to?
John Eavs, he was the inverted arials World Champion of 82 and 83 and he was also a stuntman in a James Bond movie. John Bossy, he’s 50 years old Squaw local who skis every day, always goes for it and has such passion for it. Scot Schmidt, Scott Gaffney and Aaron McGovern because he’s the most dangerous man in skiing, and that’s entertaining.

Have you got any advice for the young kids out there?
Yes, here are some words of advice. Jump in the passangerseat or get the hell out of my way. And I dare you to be as cool as I am

As a member of the Kask-team, which of the hats do you like the most?
The Sickbird is cool.

Do you have a pro-model Kask hat comming out, or a hat designed by you?
No, I let Sverre and Kaj design the hats, they´re doing a good job.